skip to main | skip to sidebar

Her little ram lamb didn't make it. A sad start to the lambing season, but things can only improve from here, right? His breathing was never quite right, very labored. My mom, a retired nurse is visiting, and we tried every trick in the book, but it just wasn't meant to be.
Faith was very sad. This was her first lamb. We have started to milk her now, and she has been the calmest ewe I've ever milked. Her teats are tiny, so it's not easy. She is so relaxed, tolerant and sweet, though.
This may sound gruesome, but I had my husband skin the dead lamb. We put the pelt in the frig. We should have ewes lambing in the next day or two. If one has twins or trips, we will try to graft one onto Faith. She is an eager and accepting mother, and it won't hurt to try!
6 comments: 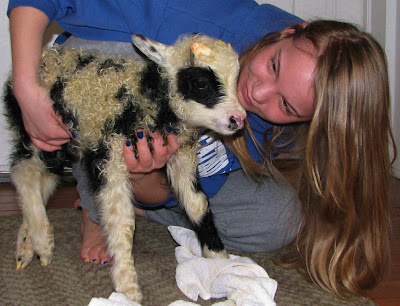 Daughter Maddie, with our first lamb of the 2010 season!
He's here! Our first lamb of the season! Faith had a huge single, a black spotted ram. He had a rough start to life. At our first barn check this morning, I saw Faith with one rear leg sticking out. I knew he would drown if we didn't get him out quickly. I found the other leg and pulled, but he was stuck tight. My husband, Randy, took over and we had him out, looking limp and lifeless. I swung him, breathed air into his lungs, and rubbed him down good. Finally he gave a little kick and came to life. It was chilly out, so I brought him into the house and worked on him longer. Randy stayed in the barn to milk out colostrum. Little by little, the ram perked up. He had a good sucking reflex, and drank a couple ounces of the colostrum.
My son had friends over, so it was fun for them to see a newborn lamb.
Meanwhile, in the barn, Faith was standing in a corner wondering happened. I never did hear her do the nickering mother sounds. We put her in the jug and tried to introduce her to her baby, but she pushed him away. I'm sure he had lost her scent, so I tried another trick. I rubbed afterbirth on him, and draped some over him. She started sniffing him, then licking and nickering! The mothering instinct is there! Now, we just need to get him nursing. I don't want to start the season with a bottle lamb.
This is our eighth season of lambing, so all lambs will have H names. My son and his friends picked the name Hrothgar, King of the Danes, and father figure to Beowulf. The first lamb of the season is the king. His sire is Finn. 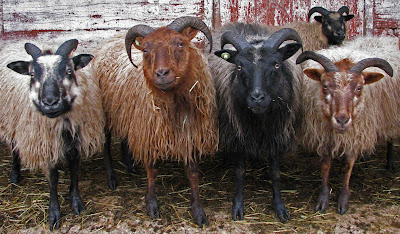 I thought that SURELY we'd have lambs by now. Good Lord! The girls are holding out on me again. It happens every spring. They love to torture me, and test my patience. They are scheming to all lamb the same day. That must be it! There are basketball udders and wide loads in the barnyard. Lambing will begin any second, I'm sure.
1 comment:

I need your help! 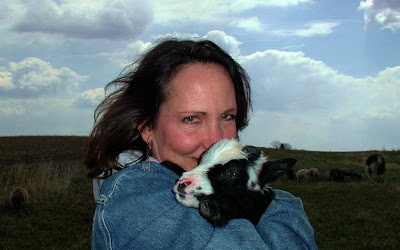 On a whim, I submitted our family for a photo contest. Imagine my surprise, when I found out that we are finalists!! If we get the most votes, a professional photographer from California will come out and photography our family, farm, sheep, and whatever else she finds interesting out here on our place. Now I need your help!
Go to her web blog and vote for Terri
before Tues. 3/16 midnight!! THANK YOU!!
here's the link: Julia Wade Photography
2 comments: 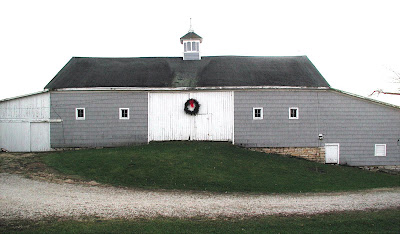 An early winter view from the North
Our Pennsylvania style side hill barn was built around 1850. I love it. Inside, I look at the ancient huge timbers, and the way the barn was constructed, and I'm so amazed. I wonder about it's past, the livestock and people that have come and gone. The sweat and tears that have gone into it. 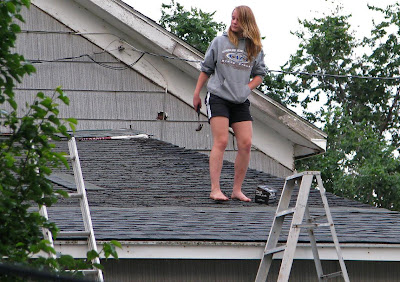 My dear daughter Maddie, always ready to help
Instead of going on vacations, we spend the money to re-roof the barn, and save the other old buildings on our old farm. Illinois has so many beautiful old farmsteads, and so many in disrepair. It makes me sad to see them, but I realize how expensive it is to keep them up. At one time, our farm had sheep, cattle, pigs and poultry, as did many small farms across the country. Factory farms and government regulations are making it impossible to make a profit as a small producer, which is too bad. 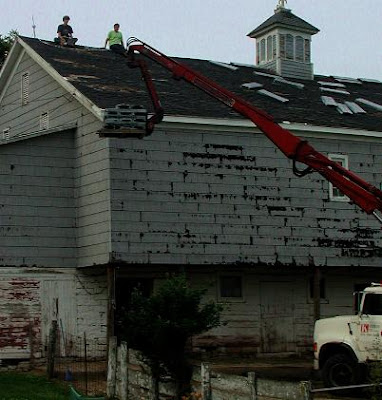 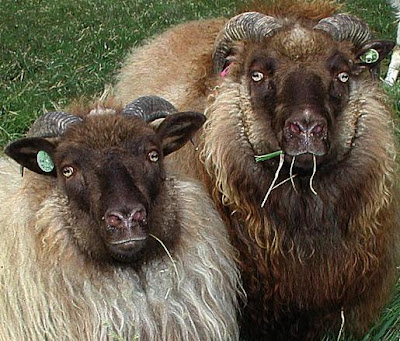 Claire and her momma Hazel, from 2005

Many Icelandic sheep breeders have noticed the strong family bonds in their sheep. I know I have. I go out to do a barn check, and sisters will be sitting with sisters, moms with daughters and grandmas, grandmas babysitting their grand-lambs. Mothers and grandmothers hang by their daughters during lambing, as if to give comfort, or maybe a few words (baa's) of wisdom. When I buy a couple of ewes from another farm, they hang together on our farm, like friends. I wonder, does this happen with other breeds, or is it because the Icelandics are a primitive breed? It is one of the things that endears me to these beautiful, intelligent sheep.
Their ancient wisdom.
1 comment: 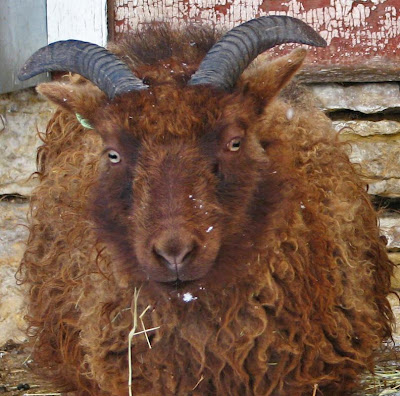 Ginger, one of our crazy little one winters
I'm beginning to get a little worried. I hadn't intended to breed any of my ewe lambs this year. Grady, our ram lamb had other ideas. He broke into the non-breeding pen 3 times this fall (the little booger!). Rams will be rams, that's for sure. The ewe lambs all look to be in good condition and not overly fat, so I'm sure they will be fine. I just wonder how many there will be..... 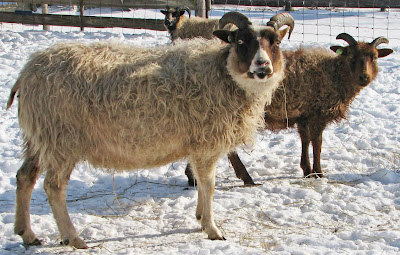 Delphine and her daughter Geranium
I've been doing udder checks when I feed in the mornings, and it looks like we'll have lambs in less than a week! I need to do a bit of prep work in the barn. We don't jug everyone, we really only have one lambing jug for 30 some ewes, then a larger pen for maybe 3 ewes and their lambs. Some don't go in at all. I keep a dry erase board handy, and record lambings as they occur. A baby monitor is on, so I don't normally do midnight barn checks, even though I'm a bit of an insomniac and sometimes wander out in my boots and robe if I'm up. Can't resist!
So many shepherds shear their ewes before lambing. We usually wait until April or May to do shearing. With Icelandics having their wool break post lambing, that's the best time to do it. The ewes do seem to shed the wool around their udders and belly, so the lambs never seem to have a problem finding their milk. Such anticipation!
No comments: 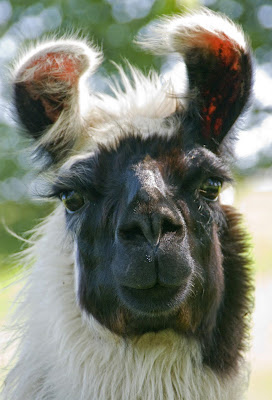 Salem, our guard llama
We've been fighting the Gala/Mal ware virus
on our computer for the past 2 weeks.
It got so bad, we had to erase everything
and start all over with new software!
My husband the engineer thought it would be an interesting
challenge to fix it himself. Interesting? more like frustrating!
I think (hope) everything running fine now....

A photographer came out to visit us last September.
I had almost forgotten about it, until I received a CD
with beautiful photos that she took of some of our animals. 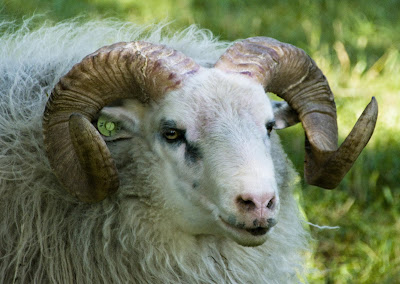 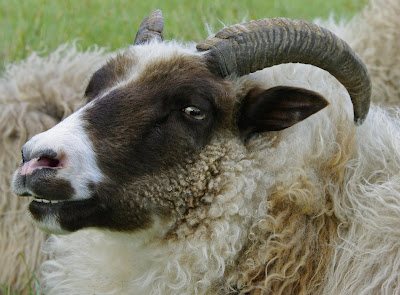 Fudge
How nice to see green grass and sheep with long flowing fleeces! 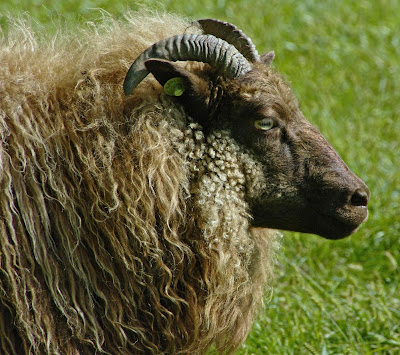 March is here! That means that lambing will start soon!

Home to a beautiful flock of registered Icelandic Sheep in Northern Illinois. 2011 was is our ninth season of lambing. We’ve worked hard to build a flock that encompasses all the aspects we love about the Icelandic breed--hardiness, exceptional meat conformation, superb maternal instincts, prolificacy and outstanding fleeces. Please look around and feel free to contact me with any questions you might have. We offer quality breeding stock, both mill spun and hand spun yarns, roving, and raw fleeces. Welcome to Red Brick Road Farm! Questions? rbrfarm@centurylink.net


Wondering about the names of our sheep? "Most" of our sheep are named according to the year they were born, especially those born here on our farm. Our first lambs had "A" names, so this being our 6th year, our lambs all have "F" names. It makes it easy for us when looking at our flock to know the age of the sheep. The sheep that we bring in to our flock sometimes have their own names, or I'll rename them according to our flock year. On this blog, I'm trying to post the oldest ewes first, then I'll move on to rams, then lambs.

Promote Your Page Too